Belarus is currently well-positioned to provide its citizens with basic water supply and sanitation (WSS) services – but that wasn’t always the case, as historical deficiencies in the country’s WSS sector resulted in negative impacts on the quality of life for residents across the country.

For example, old treatment facilities produced foul odors in the city of Berezino, poor water quality in Krichev caused washing machines to break, and the color of water in Smolevichi was frequently changing due to the high iron content. So what did Belarus do to improve its WSS sector and set it on a more sustainable path?

Following independence, Belarus faced challenges similar to those of other countries belonging to the Commonwealth of Independent States, including its transition from a planned to market economy, and continuing the delivery of basic services in an environment of enormous change. The country made impressive strides in increasing water supply and sewerage coverage, but still faced issues regarding the quality, efficiency and sustainability of its water and sanitation services at the turn of the century.

In 2006, the Government of Belarus adopted its National Water Development Program, Chistaya Voda (meaning clean water), which sought to address the remaining challenges in the sector. Its focus was on increasing the supply of high-quality drinking water, modernizing the sector, enhancing water supply and sanitation institutions to improve their quality of services and financial status, and reducing costs. With outside financing, this Program had the potential to help the sector reach new heights.

The World Bank’s Belarus Water Supply and Sanitation Project aimed to improve the quality, efficiency and sustainability of water supply and wastewater treatment services on three fronts: investments in infrastructure to rehabilitate and expand water supply and sanitation services, support to utilities in the preparation of project pipelines, and sector modernization efforts, including benchmarking utility performance and the review of norms and standards.

The Project, which supported 32 water utilities in the sustainable provision of high-quality services, originally sought to benefit 324,000 people with improved quality of water. At the time of completion, however, the Project reached 611,766 people.

Once the project was completed, 7,390 consumers also received improved access to water sources. And while a key target of the Project was the laying/replacing of 60km of transmission and distribution pipelines, the result was more than double that number at 154km of pipeline.

The Project also resulted in essential sanitation improvements. While 47,520 individuals received access to better sanitation, additional actions helped set the stage for an overall service level increase. The Project contributed to the construction and rehabilitation of wastewater treatment plants and sewers, leading to increased levels of treatment and safe disposal of wastewater, as well as increased environmental health benefits due to reduced pollution and greenhouse gas emissions. 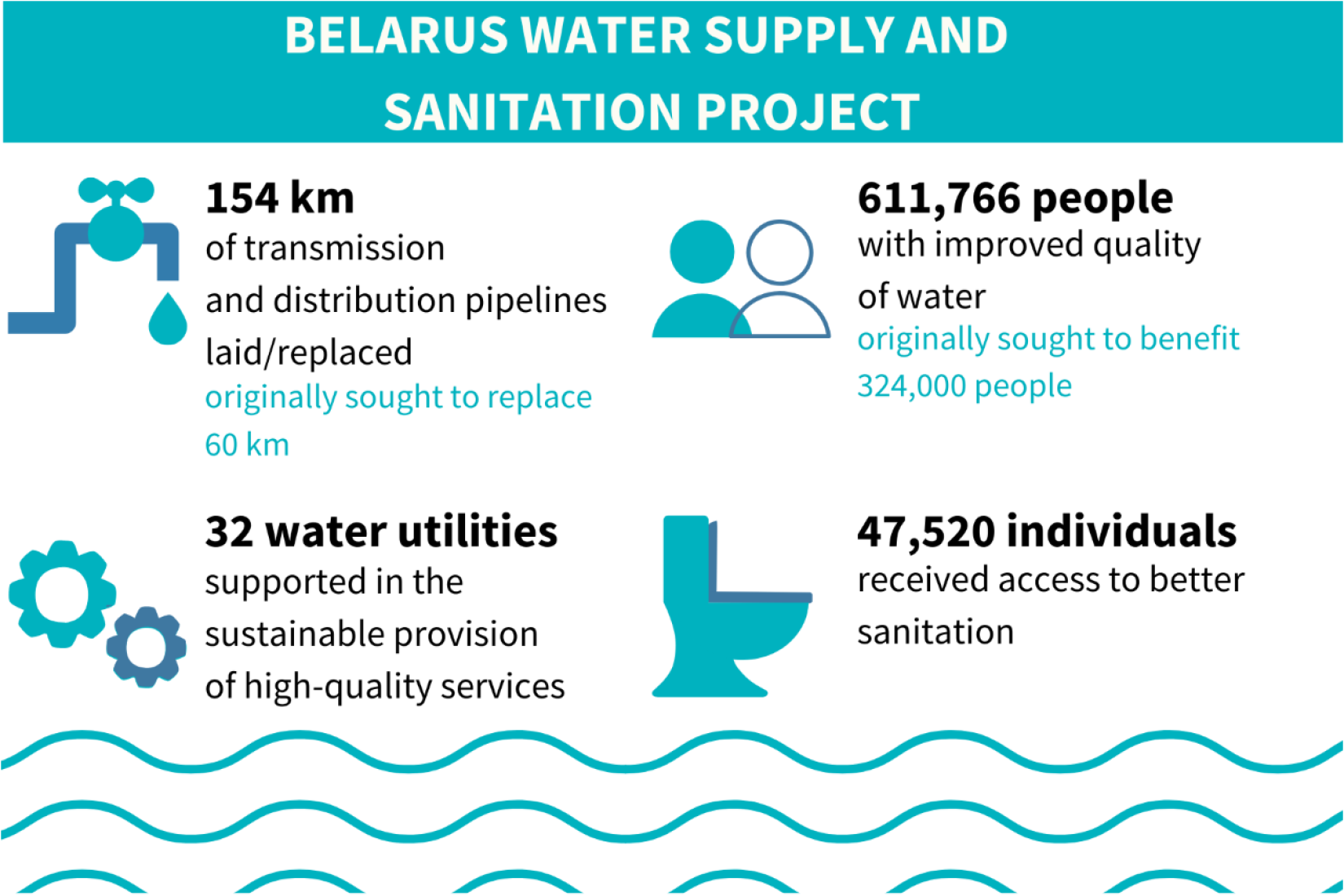 But given that numbers only tell a small part of the story, can it also be said that lives on the ground have undoubtedly improved as a result of the Project? The answer is a resounding yes! For example, residents in Berezino are now breathing cleaner air and have noticed an improved cleanliness of their main river. A new artesian well and deferrization station means fewer broken washing machines in Krichev. And that discolored water in Smolevichi? It’s almost non-existent.

Significantly strengthening WSS sectors is no small feat, and such an endeavor certainly can’t be completed with the snap of a finger. But through the Water Supply and Sanitation Project, Belarus in collaboration with the World Bank demonstrated that considerable progress could be made in improving the country’s WSS sector.