Dialogue for a Better Future for All

UN is commemorating its 75th anniversary amidst huge upheaval affecting the whole world, which is aggravated by an unprecedented global health crisis fraught with serious economic and social consequences.

Are we able to overcome this upheaval? Are we ready to work together? Or lack of faith in each other and inability to get together will not let us do this?

In this anniversary year, we have also run into an unprecedented pandemic of COVID-19, which has become another reminder of the need to cooperate closer.

How fast we manage to overcome the crisis, to achieve Sustainable Development Goals, and whether we can cope with a number of already existing challenges, such as the climate crisis, inequality, new forms of violence, rapid change in technology and demographic sphere, will depend on our interaction and joint response.

A perfect example of cooperation and joining efforts applied by so different countries for a stable and just world was the work on the UN Charter done by representatives of 50 countries, when the organization was created in San-Francisco in 1945. 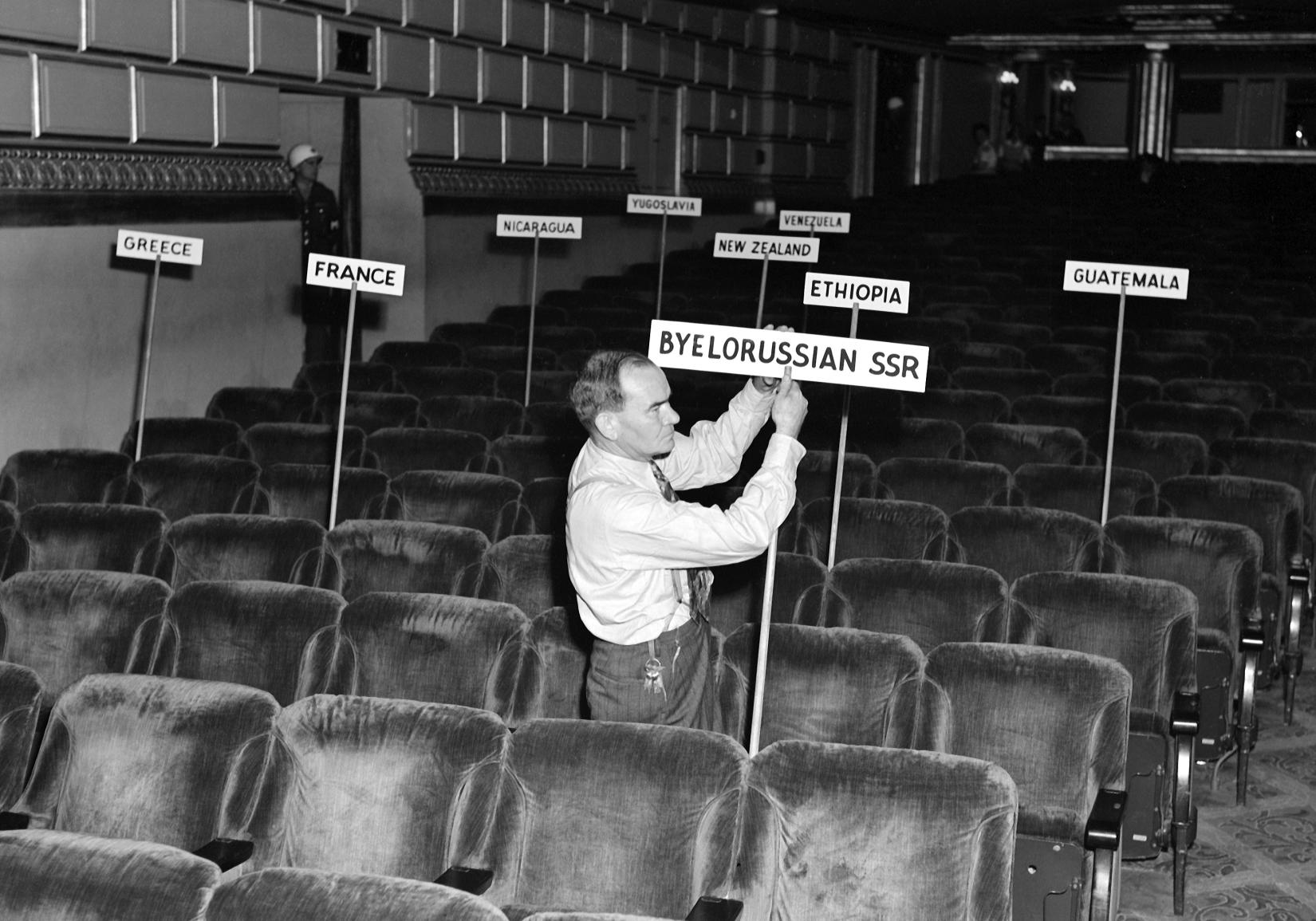 Unique photos of the San Francisco conference from the UN archives

The goals and principles of the United Nations Organization aimed at adoption of collective measures to prevent and remove threats to peace and security, development of friendly relations between nations, strengthening of international cooperation and trust, respect to human rights and fundamental freedoms for all, which UN founders set for themselves 75 years ago, do not only remain relevant today, but require further development. 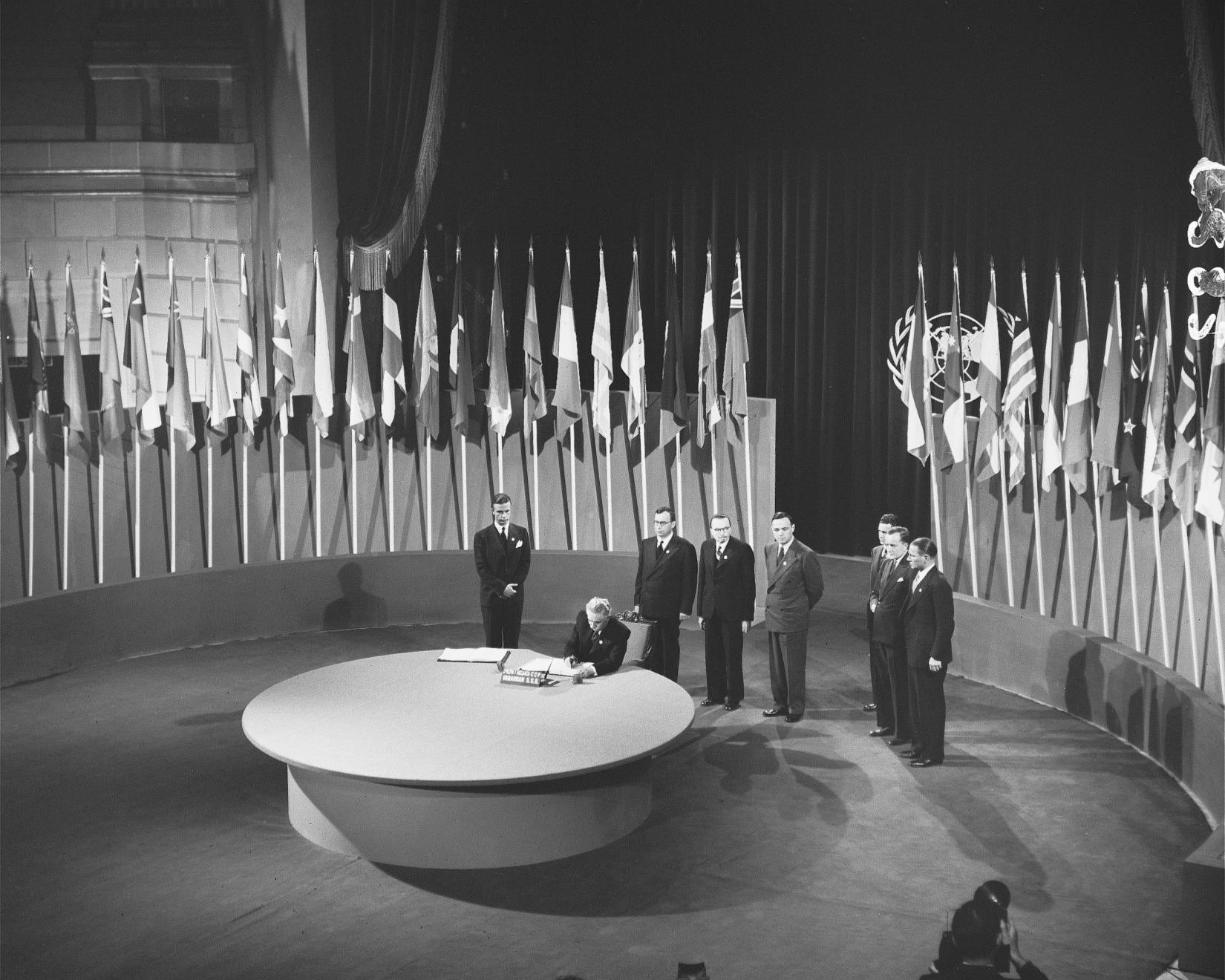 Though the world's community is facing serious natural, political, social and economic problems, at present there is no better mechanism or forums, which would help address the global challenes, than the United Nations Organization.

An exhibition of the unique historic photos opened in the National History Museum of Belarus in April, was dedicated to the 75th anniversary of San-Francisco Conference in 1945.

The Charter of the United Nations Organization was signed in San-Francisco on June 26, 1945 at the end of the Conference on this international organization creation.

The very first lines of this wonderful document reveal its universal character and relevance.  The Charter contains calls for the future without wars, full respect to fundamental human rights and equal rights for men and women.

All these values are still relevant today. And this is why we have decided to publish the UN Charter in Belarusian. 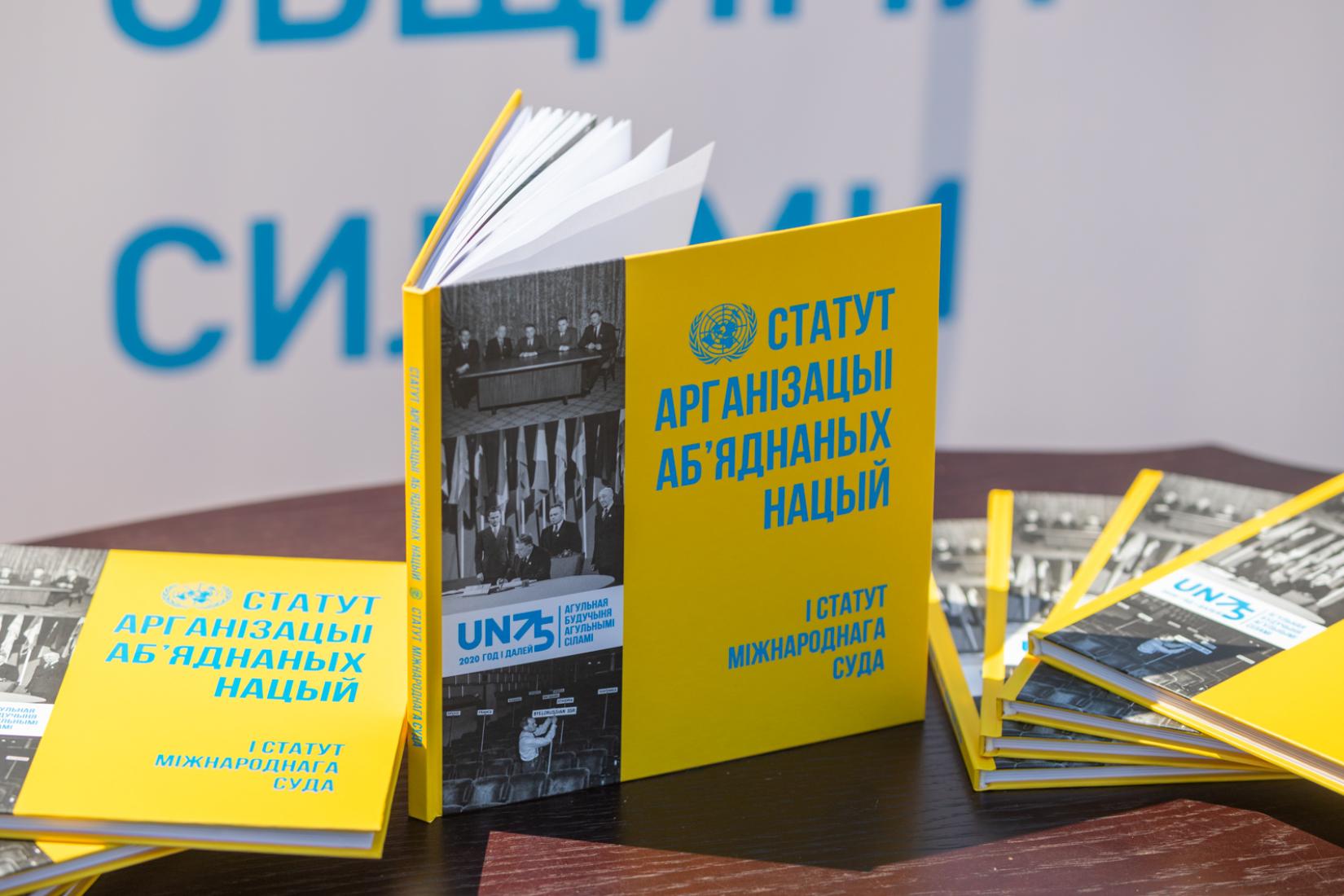 On June 26, 2020 Loshitsa manor museum hosted its presentation attended by Belarusian Foreign Minister, UN Resident Coordinator, Minsk History Museum Director, National Library Director General, as well as the UN country team and ambassadors of Great Britain, US, France, Russia, and China - the countries whose representatives were the first signatories of the UN Charter on June 26, 1945 in San-Francisco.

A film dedicated to the 75th anniversary of the signing of the UN Charter. 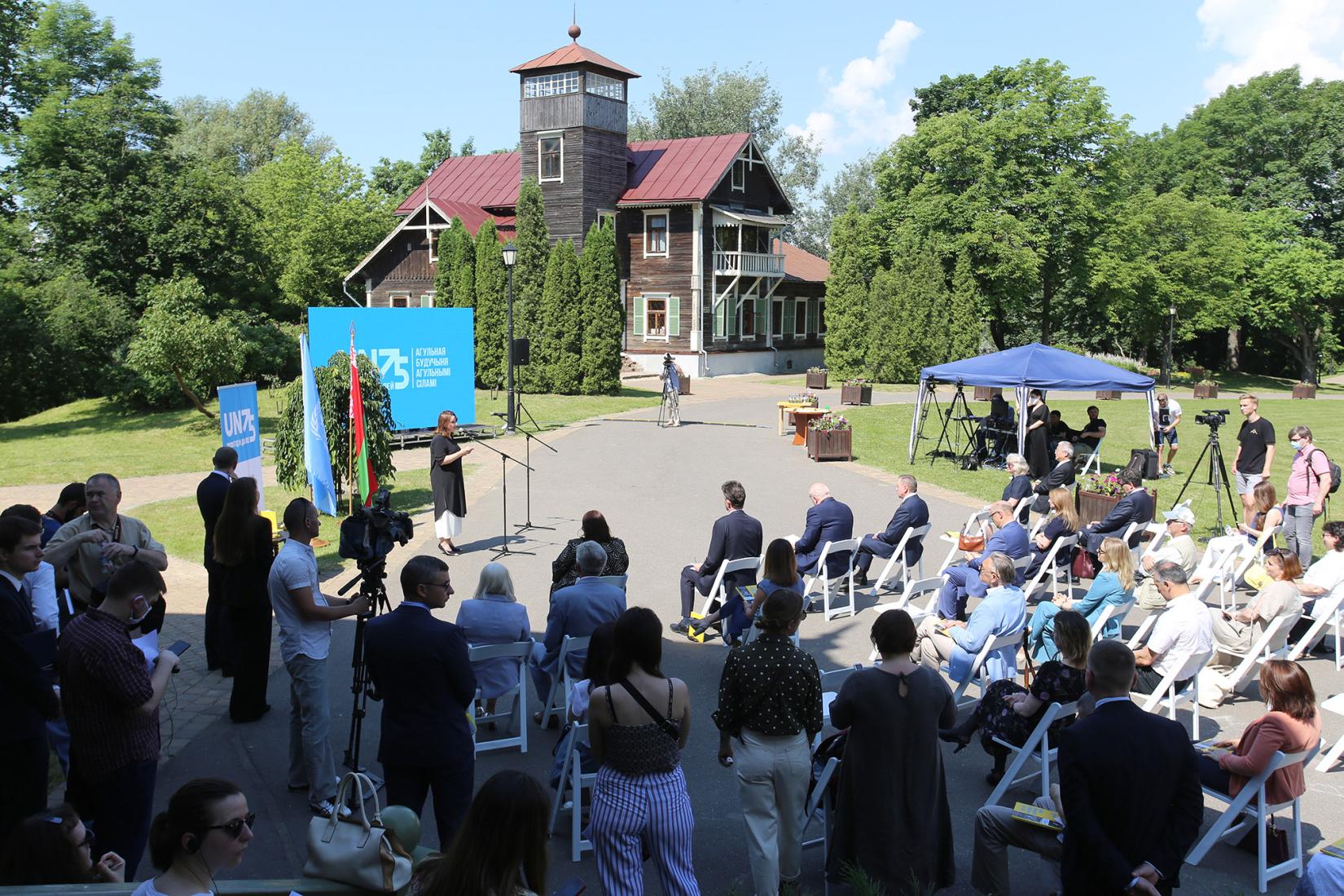 “Conflict prevention, struggle for fundamental human rights, equality of men and women, economic and social progress in larger freedom - all of these closely interlinked human priorities and aspirations in the UN Charter are still valid today.

One cannot be achieved without another. No true social progress can be achieved without respect for human rights, real equality, and without giving space to a diversity of voices and opinions. We hear the call for respect of these universal values globally and in Belarus. We hear the call of the planet that desperately needs our attention,” stated UN Resident Coordinator in Belarus Joanna Kazana-Wisniowiecki during the solemn event. 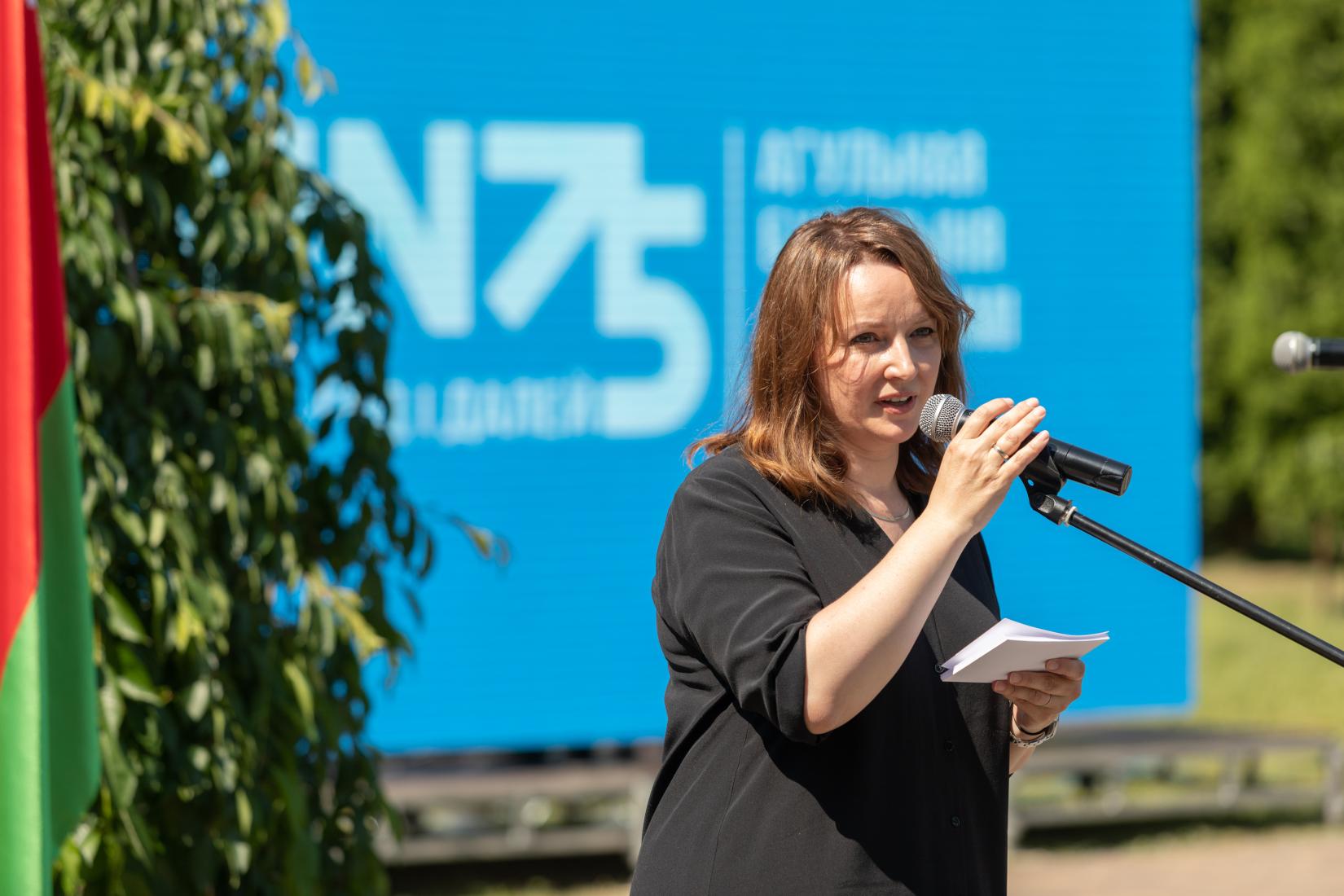 During the ceremony the UN Charter, first-ever published in the Republic of Belarus in Belarusian language, was handed over to the National Library collection.

Video: The Preamble to the UN Charter is read by the Minister of Foreign Affairs of the Republic of Belarus Vladimir Makei and students of the Belarusian State Pedagogical University named after Maxim Tank.

How do the Humans of the Planet See the Future?

United Nations Organization marks its 75th anniversary during the hard times. COVID-19 pandemic once again reminded the humanity about the necessity of cooperation both between the states and within the countries, between sectors and generations. “Everything we do during and after this crisis must focus strongly on building more equal, inclusive and sustainable economies and societies that are more resilient in the face of pandemics, climate change, and many other global challenges we face,” emphasized Secretary-General António Guterres. Will the current hardship lead to closer cooperation or even worse disruption and mistrust? 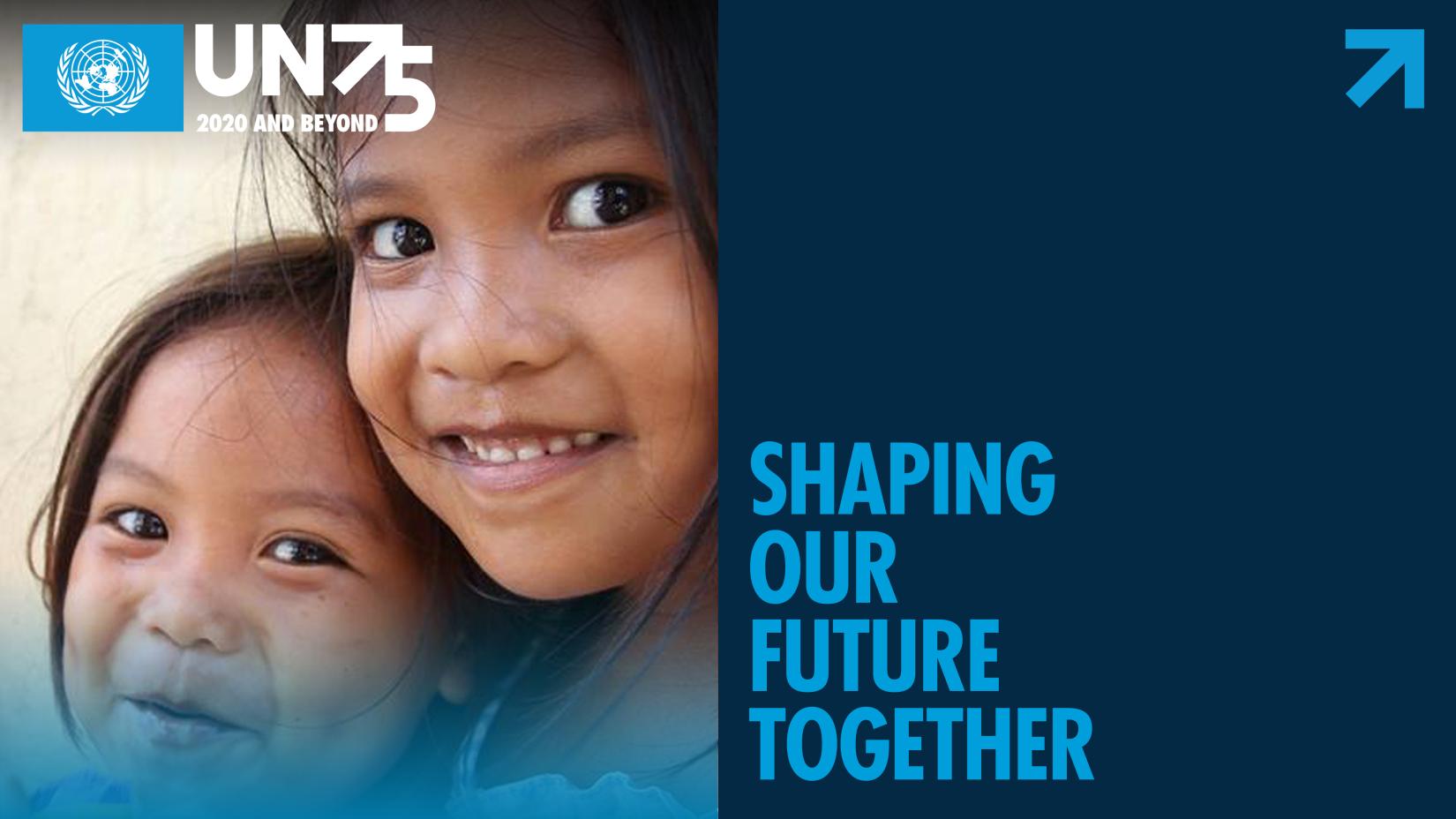 United Nations tried to find an answer to the question having conducted an unprecedented survey in its anniversary year.

Over a million of people from different social class backgrounds, from poor or rich countries, women and men, young people and the elderly took part in the survey.

It turned out that people from all over the world have a lot in common including their optimism and faith in better future.

The majority of Belarusians, of whom 77.2% were young people aged 16 to 30 years (70.8% - women, 87.7% - people with secondary and higher education) chose strengthening of solidarity between people and nations and rethinking of mechanisms of the global economy as the absolute priority of recovery from the crisis caused by the pandemic. They also believe that support of the most seriously affected countries and communities is necessary and human rights are to become the key element of the recovery plans.

Video: UN75 in Belarus: a common future together

Having noted that climate change and ecological problems and health risks will have the biggest effect on the future of our planet the Belarusians state that after 25 years of joint efforts countries will reduce the number of conflicts and achieve healthcare and ecology improvement. They also hope to see more respect for and observance of human rights and improvement of access to education.

Among the answers to the question on global trends, which will affect the future of our planet the most, ecological problems and climate change were listed by the Belarusians far ahead of other challenges as well as the health risks, armed conflicts and politically motivated violence.

The survey demonstrated that cooperation with other states to manage the above trends is considered as very important by the Belarusians. Finally, citizens of our country are optimists as the majority of them are sure that in 2045 they will live better or, at least, not worse than today.

Focus on the Youth

The number of young people has never been so big before in all of human history - between now and 2030 half of the world population will be younger than 30 years. This is why the youth is at the cutting edge of UN efforts.  The future we are working on today belong to them. How do they see it?

The Republic of Belarus strongly supported UN initiative when decided to bring the youth to the table for the nation-wide discussions of the  issues crucial for Belarus and UN. 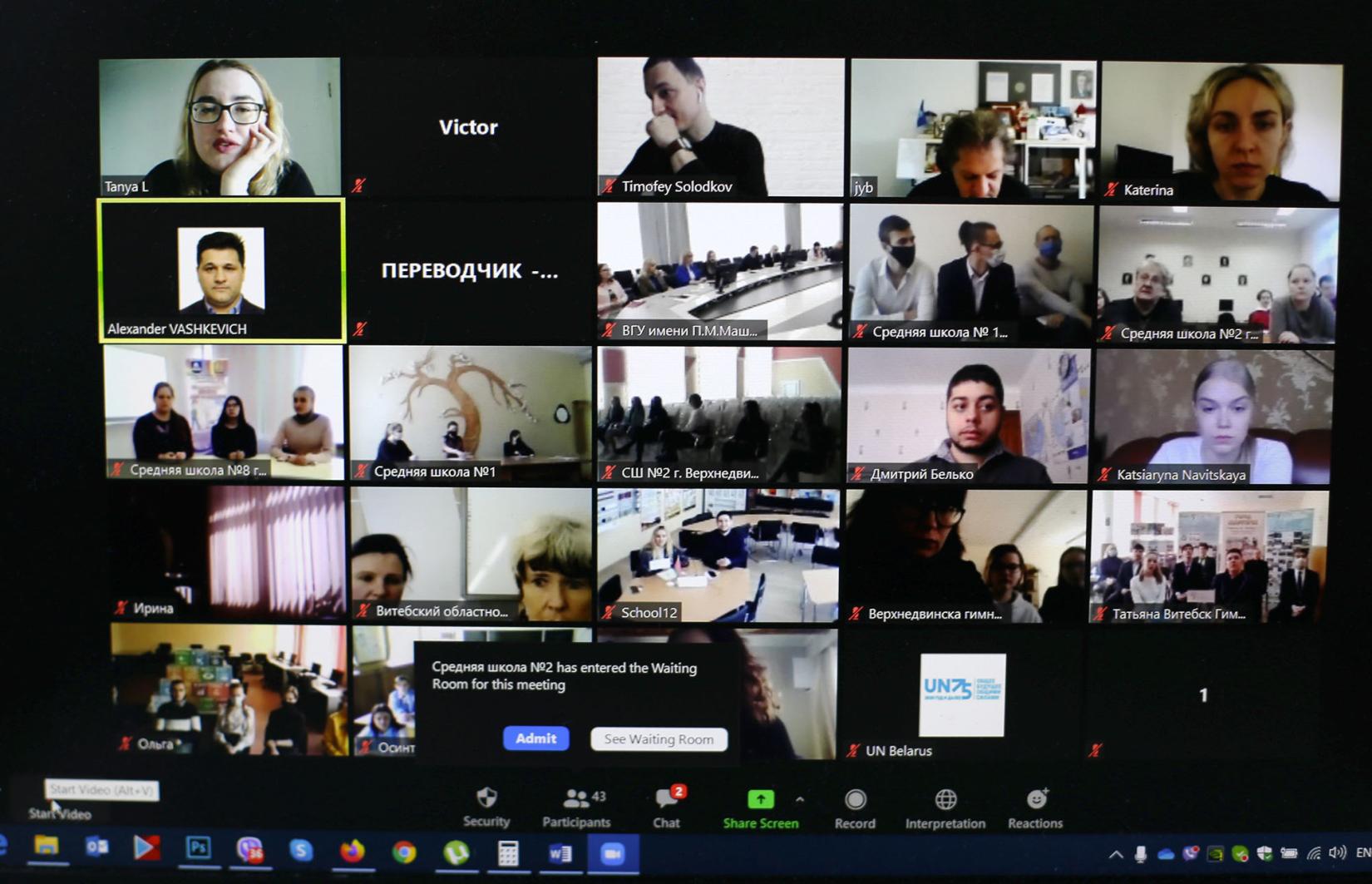 The most important participants of youth discussions  titled, “Towards the Future We Want,” in Belarus were teacher training students and pupils of teacher training classes. The Association of Education for Sustainable Development provided an integrated support in organization of regional discussions.

The key events of the Youth Campaign in Belarus were open discussions,  which took place in Brest, Gomel, Vitebsk, Mogilev, Grodno, Minsk region and the city of Minsk. 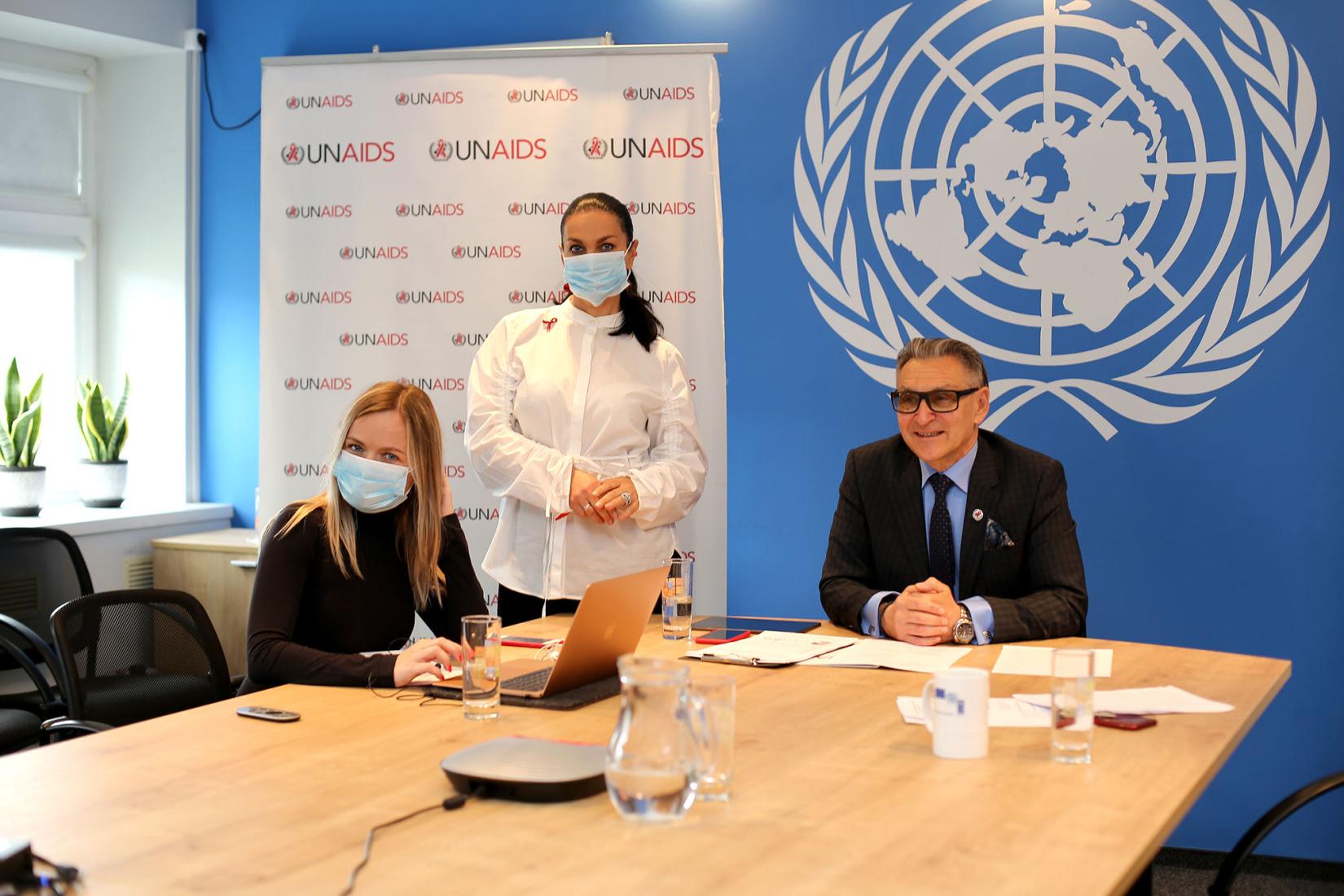 One of the events that allowed to hear the opinions of the young was the Youth Festival entitled, “Young Voices for Sustainable Development,” whose final part was organized in Maxim Tank Belarusian State Pedagogical University (BSPU). 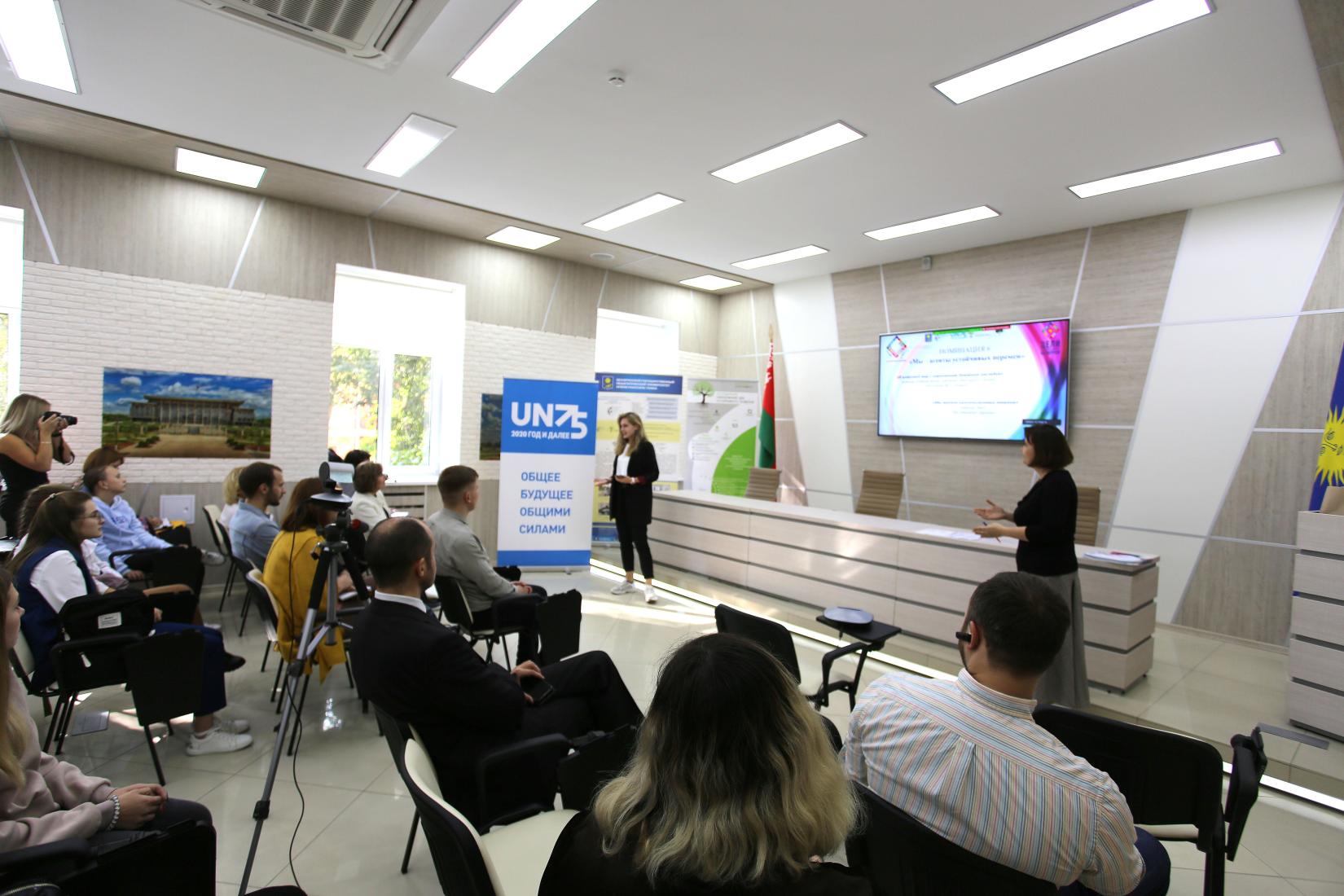 Young people from all the regions of the country in terms of video tried to answer the questions of concern, i.e. what sustainable development means, how I can make my school inclusive, how to get free from plastic, what to do with changing climate and what future they want to see.

“The good news is we can respond to the global challenges and take local decisions. The progress of modern technology and society allows us to work in our local communities both online and in real life. In order to achieve global goals and help our world, our planet, we can do something here, at our own place. And this is exactly what you are doing,” said Head of the Office of the UN Resident Coordinator in Belarus Jahor Novikau addressing the Media Festival winners. 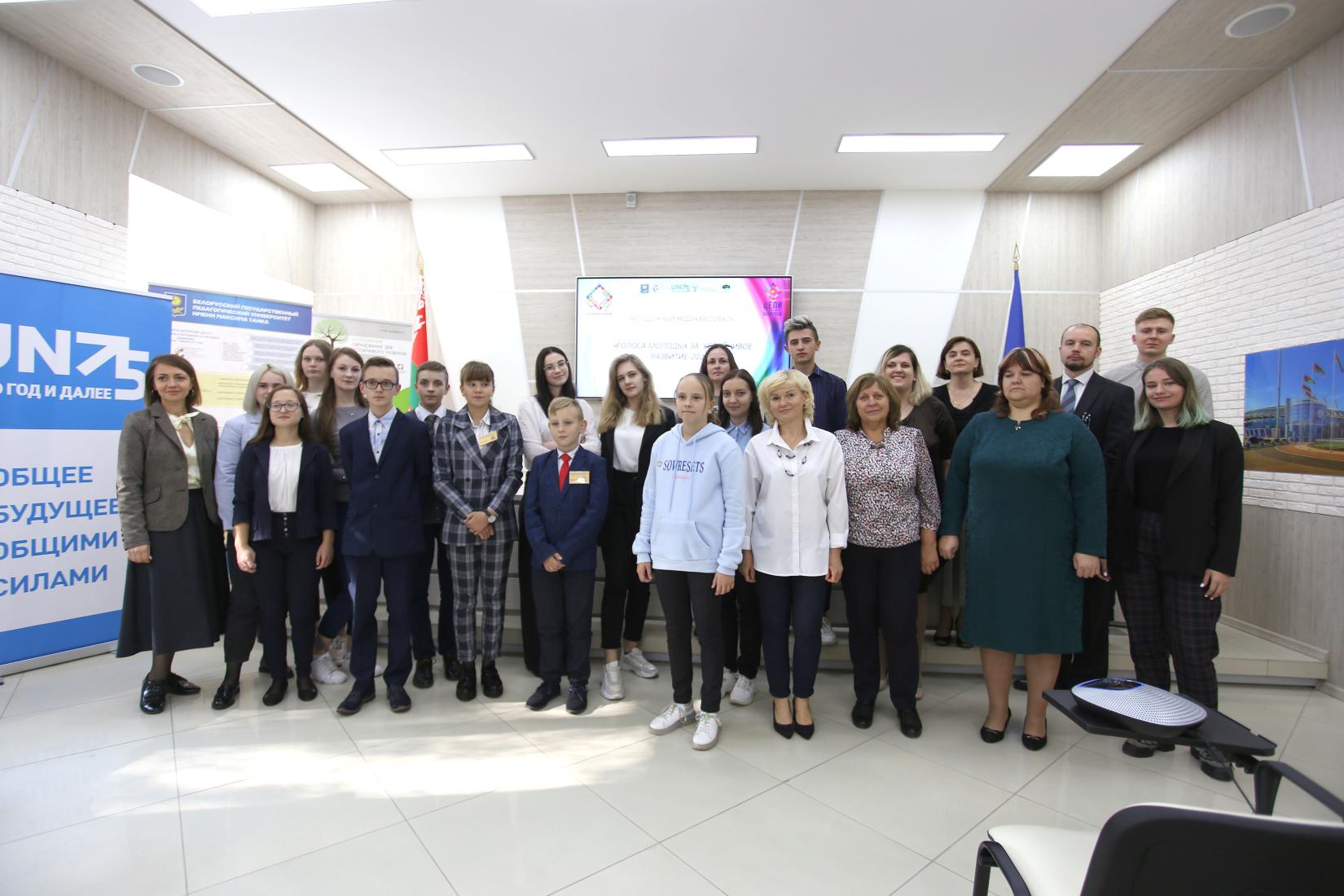 Winners of the Media Festival
Photo | UN in Belarus

Presented by teams from schools, high schools, lyceums, colleges and higher education establishments of Mogilev, Brest, Minsk, Vitebsk and Grodno regions the works, which were finalized subject to comments made by the experts, would be displayed as part of the thematic forum “Towards the Future We Want: the Position of the Youth” in December 2020.

UN marks its 75th anniversary during hard times. The jubilee has not become a cause for celebration but has been dedicated to the dialogue and exchange of opinions with people worldwide, in particular, with the youth, who inspire us all to continue our work and our mission.